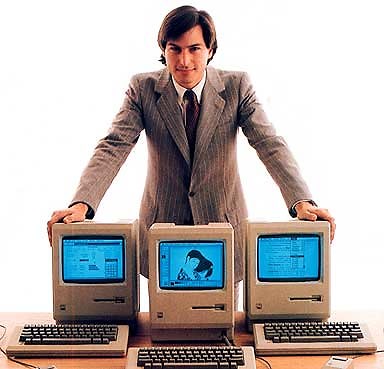 I was in the office in the middle of fighting with Morgan when we learned of Steve Jobs' passing yesterday. We both paused in our feisty tracks at the news. Suddenly the issue we were both emotionally invested in receded into the background as Morgan glanced down at her iPhone. Amid everything that's going on in the world, his passing has hit a soft spot in our hearts. We've lost our generation's fearless innovator and face of the products we are hopelessly dependent on for both work and play. But rather than going through a list of his impossible achievements, I've decided to memorialize him by asking family, friends, strangers, and a few notables you may have heard of one question: What's your favorite Apple product/app/feature and why? Here's what I got back.

PS: Thanks very much to everyone who responded. If you're reading this and would like to share your favorite Apple product/app/feature and why, please email me or comment below!

"Definitely Logic Pro. I produce music so bit of a default answer..."

"iPhone because it's an all in one device that I can't live without. It's a computer, phone, gps, communicator, music player, calendar, etc."

"MacBook Pro. Before I bought that laptop, I wasn't into computers. Once I opened the MacBook, I was genuinely interested in learning all I could about its features. It made things easier for me, communication, music, photos programs, the works. Ever since then, I've used that learning experience and put it to use in the workplace today and beyond."

"Oh man, I've been using Apple since like first grade. So right now the MacBook Pro, but all-time probably the turquoise G3 tower desktop. Because it was huge and the most hypnotizing color and it let me play 'Warcraft II.'"

"iPhone. It is everything I want seamlessly and fits in my pocket. Got the thermometer. What time we meeting tomorrow. [Pause] Lol. Wrong Person. [via iPhone SMS text]

"I live for my iPhone. It's the best phone ever, I'm on calls, emailing, texting, on the web all day long and it just works the best. It's everything I need."

"I'm obsessed with my MacBook Air. It's the best travel computer, is easy to use and the most intuitive device."

Erich, my dude at Le Pain Quotidien on Robertson:

"Oh my god, well my love for Steve goes way back. My favorite, favorite has to be the very first iPod because it's complete Zen in my life. You don't even need instructions to use it, it's a wheel and a button."

"My favorite Apple feature is the iOS interface for all of it's mobile devices. It allows one to intuitively use these devices and easily manipulate what one sees on the screen. It also makes switching from device to device much easier."

"I have such an affinity for everything Apple. Where do I begin? I just love the brand, it's entire ethos, aesthetic, and attitude. It's taught us all so much on so many levels. It's a spirit that I don' think was ever seen before on such a scale. I think my favorite product has to be the iPod. It has simply revolutionized our relationship with recorded music."

"Well not sure about my favorite, but the dearest to my heart is the Mac IIsi. It was my first computer and opened a whole new world for me and I loved every moment of it."

And my other boss' response...

"I couldn't live without my iPhone. Also love the iPad esp for scrolling my Tumblr feed."

"The graphical user interface: first made commercially popular in the apple computer models of 1984. GUI has changed the way we use the words 'icon' and 'desktop.'"

"I shuffle!! When I was training all I needed was that! It put music or information int head . Something so small meant the world of difference

Sent from my iPhone"

"My favorite is the iPhone because it can do everything and is really fast. The camera takes really good pictures and there is an app for everything. Ps love u can't wait to see u! Xoxo

Sent from my iPhone"

"if I must pick one it would have to be my iPad. I do not know how I survived without it to sell real estate, I take it everywhere, it fits in my tote bag, I can look up information on homes without having to be at a computer, I can get directions when my car navigator can't find a location, when I am out with a client I have every bit of information I could possibly need right there with me!

Sent from my iPad"

"the g5 I use it everyday I have built my life on their computers."

"App called "iVEfuct", keeps track of LA Shiksa's in need of new blood work. JRL, back in LA when Ricky's NYC runs out of blond wigs."

"The SMS is so easy to use and super handy."

"I've never been very good with technology but I don't know where I - or the world - would be without iPods. It's the closest I get to blocking out the world at times."

"Ummm laptop. I'm a writer/it's portable/small enough to be convenient but big enough that I don't feel like I'm missing out on any features that I need/it's like my own little portable world/I like my iPhone but I'm kinda old school still."

"pie, b/c it's delicious." "I had the idea for iTunes when I was a little kid. I thought 'there should be a way for my computer to play any song I want.'" "I never owned an iPod/iPhone/iPad and he still changed the way I obtain and listen to music."

"my favorite Apple product would have to be the iPod. It's really dictated my life in terms of relationships. I won't date anyone who doesn't have one, or who does have one but doesn't have all arcade fires albums on it. another deal-breaker is if a guy has one, but listens to Buckcherry or any other d-list rock. ill also end things if a guy doesn't have slim thug "like a boss" on his ipod."