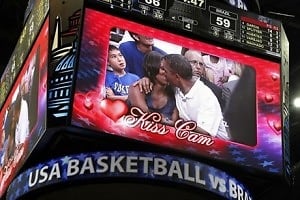 President Obama and the First Lady are featured on the Kiss Cam as they attend USA Basketball's pre-Olympic tune-up game against Brazil. [Newsday]

Charlie Sheen pledges to donate 1% of his total earnings from his new "Anger Management" show, and no less than $1 million, to the United Service Organization, which is "the largest single contribution the USO has ever received from an individual." Being a Tiger-Blooded Space Warlock clearly pays well, but joking aside, nice move, Charlie. [TMZ]

San Diego-area beachgoers are warned to proceed with caution as the recent warm weather has resulted in abnormally large swarms of jellyfish, and dozens of reported stings in the past few days. [LA Times]

John Riccardi, who was convicted for the 1983 murders of Susan Jory and Connie Navarro, the mother of Jane's Addiction guitarist Dave Navarro, had his death sentence overturned due to some irregularities in the 1994 trial. He will stay in prison. [LAist]

[The President and First Lady on the Verizon Centre Jumbotron via]