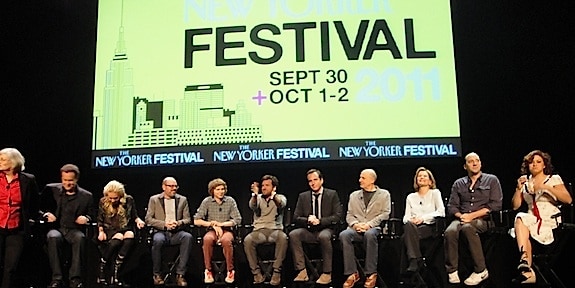 There are only a few phrases or concepts that can make a jaded, judgmental Gen-Y'er like myself giddy with excitement, phrases like "free beer," or "lawnmower accident," or, in our wildest dreams, "'Arrested Development' Reunion." Well, it seems that our wildest dreams may be coming true, because over the weekend, 'AD' creator Mitch Hurwitz and the entire cast of the too-brilliant-for-this-cruel-world comedy gem got together to sit on a stage in New York City for the New Yorker Festival.

And while this alone would be enough to make us smile, it gets better, as they announced plans for not only the long-rumored "Arrested Development" movie, but also new, spin-off TV episodes to be released before the movie. Keep reading for more of what we learned, some wild speculation about the reunion, and some of our favorite moments!

[all Festival photos via, episode stills via]