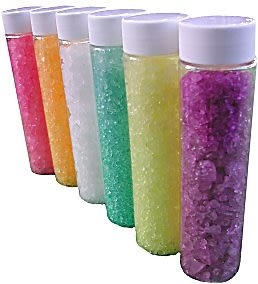 This might be the worst way we've heard to get high. A new designer drug trend has hit American gas stations, truck stops and tattoo parlors: bath salts. We get headaches and need to sit down on a bench in the mall just by walking past Bath & Body Works. Can you imagine the what doing rails of Sun-Ripened Raspberry bath salt must be like?

If you thought it was weird to see bath salts being sold right next to the cigarettes in your local gas stations you're probably onto something.

Forget about the soothing aromatherapy of eucalyptus or lavender-vanilla, these "bath salts" are full of chemicals that mimic the effects of cocaine and speed, and are potentially lethal. People have been buying packages with typically gentle labels such as "Vanilla Sky" or "Ivory Wave," and snorting or even injecting the substance. The thought makes us gag.

The bath salt designer drug is a growing issue in the south (no surprise there) and has already been banned in Kentucky, Louisiana and Tennessee. BANNED BATH SALTS! Not that we've been hanging out at any gas stations or truck stops, but we hear the drug is already in California. Kids these days.. whatever happened the simpler times of Four Loko? [photo via]