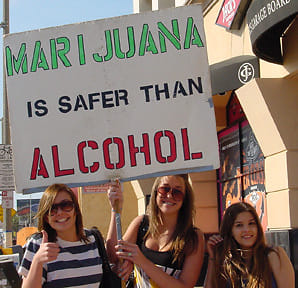 We might as well get the bad news out of the way first: the future of medical marijuana in L.A. is a little more up in the air now than it's been for a while. This is because the grinches at the L.A. City Council's Planning and Land Use Management committee met today at City Hall to consider the endorsement of two competing proposals from Councilmen to regulate and severely limit the operations of dispensaries in the L.A. area. The first proposal, from Councilman Jose Huizar, would ban all but 100 select dispensaries in the city for the time being, while the city waits for a State Supreme Court decision that will eventually determine how much power cities will have in regulating marijuana sales in general. The second proposal, from Paul Koretz, would ban all dispensaries outright but exercise "prosecutorial discretion" to potentially refrain from actually shutting certain dispensaries down. As the long line of chronically ill marijuana patients who testified at the open hearing were quick to point out, neither of these options would make it particularly easy for those who are actually sick to get their medicine. And of course we'd be remiss if we didn't point out that it will also make life harder for those of us that like to order pizza and watch Star Trek at 2 in the morning. Either way, we'll find out soon enough, as the committee endorsed both proposals, which means they'll go in front of the Public Safety Council on Friday and then on to the full Council after that. [via]
1 of 5