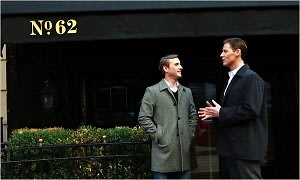 From a profile of Dan Abrams and Dave Zinczenko to a piece on Mark Madoff's suicide, here's what you should have read this weekend.

2) Cayte Grieve over at BlackBook has a great list of the best bars to entertain holiday visitors.

3) Tim Arango has a first-person piece on Elaine's in the Styles section. He reminisces on how the iconic restaurant--with its coterie of famous writers--informed his life in New York.

4) Mark Seal has a smart piece on vanityfair.com about the suicide of Mark Madoff and the tense climate he found himself in during the wake of his father's scandal.

5) Check out Jane Kramer's Talk of the Town piece in this week's New Yorker, in which she addresses the continual theft of Robin Heidi Kennedy's art work.