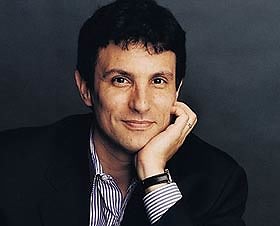 When we caught up with  New Yorker editor David Remnick at last night's Moth Ball, he discussed his measured approval of the growing influence of the iPad in journalism but warned that content should not be free...

At the party held at Capitale on the Bowery, Remnick sat at a table with a crumpled print out trying to memorize a speech he would give later in the evening.

When news broke yesterday that Sasha Frere-Jones, a music critic at The New Yorker, would become culture editor of The Daily, News Corporation's iPad newspaper, media writers immediately wondered whether Frere-Jones could legitimately fill both roles without spreading himself too thin.

"It depends on who you are," Remnick said of the delicate balance. "If you are a foreign correspondent running around the world all the time, it would probably be not advisable to take a second job as a foreign correspondent running around the world for someone else. But Sasha's job is such that he may be able to pull this off, and if he can, all the greater glory to him. I'm not trying to stop people. You know, my job is not to tamp down people's creative urges or their ability to make a living."

Remnick asserted that as long as Frere-Jones sticks to his contract agreement with The New Yorker and produces the same quality work, there would not be a problem in the Murdochian and Eustace Tilley roles Frere-Jones will straddle.

"My feeling is if a writer does what we both want of him or her, I don't care if they, you know, dangle from a chandelier and spit nickles while they're doing it," Remnick said.

But in a sense, the iPad has become an encroaching force at The New Yorker given the launch of an Adobe- partnered iteration of the venerable magazine. This new move from one of Remnick's top critics marks an unexpected fallout and bellwether of the iPad's hold on the future of how journalistic content will be consumed.  For an old-school journalist like Remnick who held, for instance, a celebrated stint as The Washington Post correspondent, does this sort of tech advancement horrify him?

"No, no. why would it?" he said. "All I want you to do is read us, and I think the iPad's actually a quite beautiful way to read us. I think it's quite obvious, though, that we're gonna get a lot more readers once we have a subscription model. I think that's a payment thing. And there's clearly been, and we're not alone in this, hundreds of magazines are in these discussions with Apple to get a proper subscription model, and when we do, I think it will be a really viable and great way to read it."

In an age of openness--a sort of tech glasnost--where the proliferation of free content is all the rage, Remnick spoke of a commitment to paid, subscription-based content, which may make people unjustifiably categorize him as miserly.

"Where I'm a curmudgeon, if that's the word, is and where I get criticized on-line, and so be it, is I don't think it's free," he said of the iPad version of the magazine.  "I think that what we do has value and that it's worth paying for."

Readers will pay for The Wall Street Journal on-line, for example, because the information presumably can help readers gain market knowledge to act on stocks and gain more money. There is an inherent and direct value to that information. But is there a similar equity value at The New Yorker?

"That's for you to decide," Remnick said. "I mean we already have a million subscribers who have already answered that question on paper. And it's the reason why I make no bones about it: I don't want to put the entire New Yorker on-line for free, because I don't want to train a younger generation, that's what it is mainly, to think that this, you know, comes out of the faucet like water."

It's a money-doesn't-grow-on-trees argument, and Remnick doesn't want a tech generation--the ainsi-dit Wii generation, let's say, or somesuch--to become accustomed to the free consumption of content. Remnick wants to put the kibosh on this expectation that web content is for free and wants to reverse that trend by putting parameters around paid content--with due reason, he believes.

"Too many resources, too much time, too much expense goes into it to think of it as free," he said. "'Information wants to be free,' is not a bumper sticker rubric about value. It's about fluidity. It's about other things. And so I think that bumper sticker got vastly misunderstood."

Admittedly, Remnick still prefers the print version of his magazine, but he did qualify that statement when addressing the iPad version, which he reads every week to play an instrumental role in the organization of content on that platform.

Painting Remnick as a Luddite, he said, is "an easy cartoon to make, because I'm not 26, but, so what?" Yet the editor is an adapter in that he prefers the iPad version in some respects.

"There are some things about the iPad that, dare I say it, better," he said.  "If you're reading a music piece by Sasha, and we decide to put an interview or a piece of music on there, great."

He said there are vast possibilities for interactive reading that will appear on the New Yorker's iPad, but those will come when he establishes a proper subscription model so that there is a critical mass of people consuming the materal; otherwise the changes and efforts might be lost in a tree in the forest type of situation without enough of a readership in the new framework.

Outside of The New Yorker, to boot, Remnick has at times foregone glue and paper books to read in electronic form.

"I've read books on an iPad as well," he said. "And if I ever went on vacations, that's probably what I'd do, because I tend to take five books along, and that's a pain in the ass, cause it weighs a lot. But I'm not very good at the vacation thing."

At that thought, the notoriously overworked editor then went back to mingle with Calvin Trillin as people took their seats for dinner.