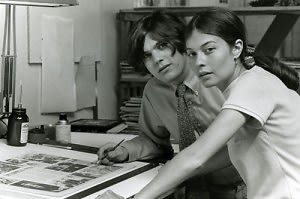 Rolling Stone and Us Weekly owner Jann Wenner caused a scandal in 1995 when he left his wife Jane to pursue a relationship with with his gay lover, model Matthew Nye.  Now, 16 years later, she is filing for divorce. Why now?

There are two reasons being speculated:

1) Jane's father helped fund Rolling Stone when it was getting started and she is still a partner with the official title of Vice President of Wenner Media.  Those in-the-know believe it means Jann might be selling his empire, reports Page Six. “It can only mean they are selling. In the past, it was always too complicated.”

2) Now that gay marriage is legal, Jann and Matthew may simply want to tie the knot and make it official.

The second reasons seems more plausible. While Jann could get $750 million for the magazine, most moguls don't just up and sell their legacy because they've gotten older and don't have children who want to take over.  He could be the first, but we hope that instead he decides to hold a gay wedding bash with live entertainment from acts that have peppered the pages of his mag.