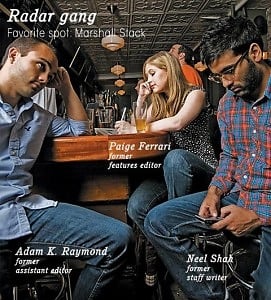 TimeOut NY has a feature this week titled "They Need a Drink" showcasing some of the city's most recent laid of workers and where their favorite hangouts are to drink away their job woes.  We got a kick out of the ex Radar Team. Adam Raymond, Paige Ferrari, and our favorite, Neel Shah seem to chose Marshall Stack to twitter their days away (this is also a favorite spot of Lockhart Steele from Curbed).  The lazy drinking days were short lived by Neel, who has just gotten picked up by Page Six.  Thankfully, it looks like he has his new phone up and running too.