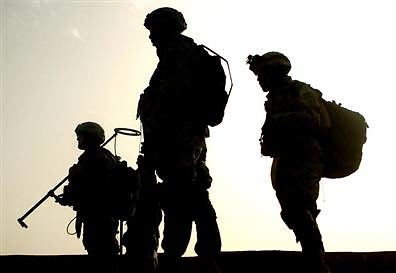 We came across something very disturbing in today's Metro.  In an article titled "A Soldier's Suicide: Did He Have to Die?" we read about the story of soldier Jason Scheuerman.  Jason took his own life in Iraq after numerous displays of suicidal characteristics and behaviors.  What was more horrifying was this statistic, imbedded halfway down in the article:

"At least 152 U.S. troops have taken their own lives in Iraq and Afghanistan since the two wars started, contributing to the Army's highest suicide rate in 26 years of keeping track."

This is so, so sad.  Not only are we loosing thousands of troops to the enemy (whoever that may be at the time), we are loosing hundreds of sons and daughters to despair.  And it doesn't end when they return home.  America is suffering an epidemic of suicides among traumatized army veterans.

"More American military veterans have been committing suicide than US soldiers have been dying in Iraq. At least 6,256 US veterans took their lives in 2005, at an average of 17 a day." [TimesOnline]

As a nation, we need to step things up.  Jason is an example of several military leaders failing to take action.  On a mental health questionnaire he had admitted thoughts about killing himself, also that he was uptight, anxious, depressed, and had feelings of hopelessness and despair.  He had also made calls home saying goodbye, and spoke several times about wanting to kill himself.  His leaders many of the times played these claims of his off as exaggerated jokes by the soldier, and even gave him back his gun after serving him with 14 days of extra duty as punishment (minutes later they found him dead in his room).  Imagine the angst of his parents, who were soldiers themselves, and feel this should have been prevented.  His dad Chris:

"We will not see a statistical decrease in Army suicides until the Army gets serious about holding people accountable when they do not do what they are trained to do."

It IS time for our leaders both in the military and back home to step up and start aiding in the mental health of our troops and our veterans.