Noah Baumbach's Greenberg opens today. Ben Stiller stars as the titular lead--a listless, adrift and regretful man entering middle age a complacent failure. The feel-good movie of the year is set in LA and is the latest in a string of movies by and about New Yorkers moping around Los Angeles.

Greenberg is back in LA after 15 years in New York. He's played by native New Yorker Stiller, who is directed by native Brooklynite Baumbach. And so we can add it to the canon of New York movies that view LA with suspicion, weariness or flat-out disdain. 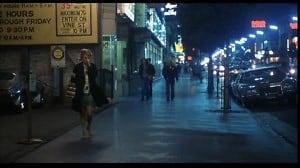 John Cassavetes, Director: The granddaddy of American indie film, Cassavetes was born in NYC, raised on Long Island and set his first movie Shadows in midtown jazz joints and the MoMa sculpture garden. But he quickly moved onto Los Angeles for his best-known works, like Faces (about miserable, pill-popping swingers), A Woman Under the Influence (about a miserable, crazy alcoholic housewife) and The Killing of a Chinese Bookie (about a miserable strip club owner and failure whose mob debts lead him to murder). Not the most flattering portrayal (though Cassevetes movies rarely flatter anyplace or anyone), but still a progenitor of the view of LA as ennui-ridden Dystopia, no matter how sun-soaked.

John Cassavetes, Actor: Rosemary's Baby might be set entirely in New York (much of it at The Dakota). But remember that it's Rosemary's struggling actor husband Guy Woodhouse (play by Cassavetes) who goes along with the witches coven next door to have Rosemary bear the son of Satan. Why? For juicier film and television roles that might allow the couple to ditch the city for the "beautiful hills of Beverly with a pool and a spice garden--the whole schmeer." See, LA's influence is corrupting enough to stretch clear across the country. 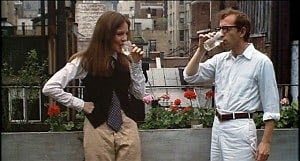 Alvy Singer (Woody Allen) in Annie Hall: Arguably the most famous disgruntled, LA-hating New Yorker in the history of film. Of course, Alvy's  distaste for the city stems from personal insecurities and failings. His best friend Rob (Tony Roberts) flees the "left-wing, communist, Jewish, homosexual pornographers" in Manhattan for cheesy acting gigs in LA and winds up tooling down Mulholland in a sick convertible. WASPy Annie (Diane Keaton) also relocates to the City of Angels, quickly embracing the town's vegetarian restaurants, much to Alvy's disgust.

Alvy never gives LA a shot, of course. But he does deliver some great jabs at its expense that could only come from a dyed-in-the-wool New Yorker. On why LA is so clean: "That's because they don't throw their garbage away, they turn it into television shows." On its contributions to society: "I don't want to move to a city where the only cultural advantage is being able to make a right turn on a red light."

Barton Fink in Barton Fink: From the Coen Brothers, this is about a neurotic New York playwright who reluctantly comes to LA to write scripts for a major studio. Barton (John Turtorro) is desperate to avoid selling out or having his work unduly compromised by the film's ludicrous send-ups of Hollywood schmucks. Along the way, he contends with a deserted hotel that would give The Overlook a run for its money in the creepy department, encounters with a very thinly-veiled F. Scott Fitzgerald characters and being framed for murder. Obviously, he misses the highbrow culture of the Great White Way for his entire stay. 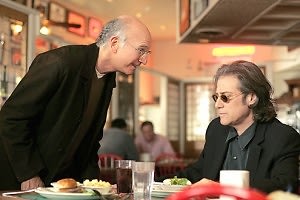 Larry David in Curb Your Enthusiasm: After creating the quintessential New York sitcom of the '90s (Seinfeld, which was shot on an LA soundstage), Larry David decided to just slightly fictionalize and film his own bitterness, explosive social awkwardness, and political incorrectness while ambling around the streets of LA. David rarely pines for his native New York (as buddy Richard Lewis bitches about LA's car culture and reminisces about walking around Manhattan, David swears they never walked anywhere together), but probably just because he's too busy digging himself into holes and desperately clawing his way out of them.