...is not Tinsley Mortimer (who's ringlets and smirk are beyond passé), Amy Sacco; (the "Queen of the New York night scene" has finally lost her reign, well at least until her hotel opens up in the financial district), or even Hilary Clinton (though at the top of the Post's "NY's 50 Most Powerful Women" she doesn't hold a candle this month to this lady). For the most in-the-know social New Yorkers, Spring 2007 will be remembered as the season of Miriam.

We are only half joking by giving such recognition to the once no-name door girl who is, it seems, at the peak of her career as we post.

She is the one who dictates who will and will not be getting into arguably the only place to be partying in the city right now, the little establishment on Chrystie and Rivington that is trying to save us all from the FUNK of a mess created by 27th street/meatpacking....The Box.

Bungalow 8 has had its run, and Tenjune is fun if you're a spoiled 16 year old at a Colombia prep bday party, but Hammerstein's Box has proven that if anything is going to help pick us up from being elbow to elbow with B&T scraps it's going to take a show...and an EXTRAVAGANT one at that. The view from the top floor where the private seating areas are, offer a perfect vantage to take in full the craziness that ensues each night here, as well as an inside look at just how pathetic most celebrities are (and extremely poor tippers). 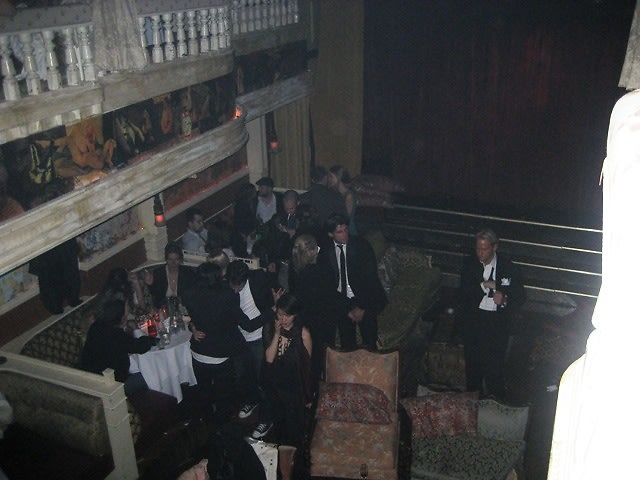 If you haven't heard of the place, you have in fact been living in a box...if you have and should opt to try and witness the human oddities and circus acts (both on stage and in the crowd), you will undoubtedly come in contact with Miriam....

There's one conflicting issue, Miriam is actually...nice. We can't decide if this makes us more annoyed with her position or not. Sometimes it's just better to be told "I'm sorry if you don't have a table, you're not famous, and you're not fucking a manager here, don't even try standing in this line." This is what we were used to and what we came to expect from doormen named Disco and the like in the beginning. It's what kept us intrigued, made us want to be inside those doors more than we've ever wanted anything else. That kind of rejection felt, well "right". It made the times we did get in feel so much better, validated our pathetic existences.

Being told in a sweet voice how sorry she was that she couldn't let us in because of "plumbing issues" one Saturday night after just seeing a crew waltz in 10 minutes earlier kindof made the next Wednesday early morning there a little less special. We like your style Miriam, and your vespa, all we are asking for is to be treated a little more like dirt.