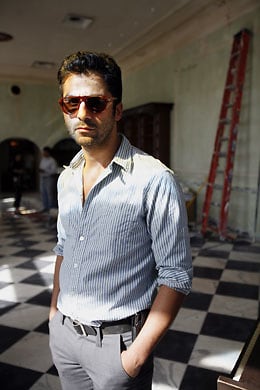 Everyone has a book, everyone is an actor, and now everyone has their own nightclub...According to the New York Observer, It seems that Armin Amiri, famed doorman from Bungalow 8, is going to try and parlay his doorman skills into success as the proprietor of a new café-lounge titled Socialista in the West Village.   The cuisine is described as Cuban infused with an Argentine influence, which we can only conclude is simply a fancy way of saying Mexican food. So how did he get the inspiration for such a venture? "I saw it and I just saw Cuba."   Mr. Amiri, however, has never been to Cuba, nor does he speak Spanish or have any Cuban background to speak of.   He also did not live in the 1940's.   "Back in the old days-you know, the 1940's-when you went out, it was all about respect."  But he does posses a working definition of socialism:

"What socialism really means is, I give you this and you give me that. And as the door goes, I'm gonna bring you into this nice atmosphere; hopefully, you're going to bring your great energy in here. And that's it-that's the only even exchange I want with people.

What is of course omitted in his neo-socialism is the required $600 dollar table expense.  Perhaps most troubling, however, is Mr. Amiri's apparent confusion between Casablanca (i.e. Morocco) and Cuba, as well as the fact that in New York the sun does set, and there are dark cold winters.  "And do you see that light?" (addressing the sun through a pair of tortoise-shell vintage Persols). It's gonna create that Casablanca effect all the time." Lest there be any concern, however, Mr. Amiri will be putting his acting career on hold for now to focus on the task at hand.