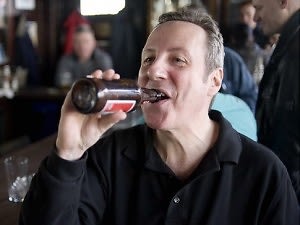 Marty Wombacher, the American hero with a plan (and a blog) to visit 365 NYC bars in 365 days, hit up his 75th watering hole last night. He let me tag along and picked up my drinks as Lucy's joined his growing roster of drinking spots.

Wombacher moved to New York from Peoria in 1993. He was quickly introduced to and bemused by the city's absurd journalism subculture and decided to skewer it with Fishwrap. The magazine--think a print version of Spiers-era Gawker--satirized publications like The New Yorker and Vanity Fair. One advantage old media parody has over new media digital snark: Wombacher happily comped issues of Fishwrap to the bigwig editors they lampooned, which resulted in a few miffed (and also, flattered) phone calls coming in from the Michael's crowd as they flipped through the pages at their desks.

Meanwhile, he worked inside the system he mocked, doing freelance work for Time Out New York (he appeared in its inaugural issue) and the Daily News. He also wrote books like "The Boy Who Would Be A Fire Truck" and "99 Beers Off the Wall: A Crazed Guide and Twisted Travelogue of One Man's Journey to 99 Bars in New York City in Seven Days" which is kind of like the 100-yard dash to his current boozy marathon.

Wombacher invited many of his foes out for drinks, but a few were too pissed to take him up on it. No worries though--he's meeting plenty of people out on the trail now, including bartenders. One of the few regrets of the job is being unable to revisit favorite places and barkeeps. "They ask me to come back, and I have to say I'll see them in a year," he says. Happily, photos of fellow boozers that accompany each entry on A Guy Walks Into 365 Bars serve as reminders. Marty says he "was nervous at first" about asking strangers to pose for his blog. But he got over that hurdle at his first stop, Otto's Shrunken Head, and finds that "probably thanks to Facebook," 95% happily oblige.

Who knows, if Wombacher's blog gets turned into a movie (think Julie & Julia with whiskey in place of butter), some of them might get cameos.