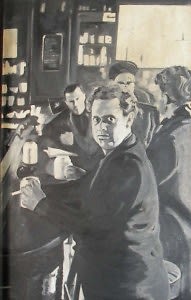 Citizen journalist Marty Wombacher has made it his mission to visit a different NYC bar every day for a year. And in the grand tradition of drunk writers, he blogs about it! There are worse gigs, right? Maybe not. Consider the occupational hazards.

First, I've got to commend Wombacher's commitment to the A Guy Walks Into 365 Bars cause. He spends a minimum of one hour in each place he visits, during which he downs at least three drinks. That might be a mere shadow of your own nightly routine, you drunk, but the catch is Marty's self-imposed rules prohibit him from saddling up to the same bar twice.

That means he's got to spend sixty minutes or more in places like the Doghouse Saloon. Doghouse is the sports bar that replaced hipster den The Annex and pushed the fratrification of the Lower East Side into a new gear. Tinsley Mortimer hung out there too. Wombacher fought through the shakes to give Doghouse a thumb's up (there are rose-colored benefits to critiquing under the influence). 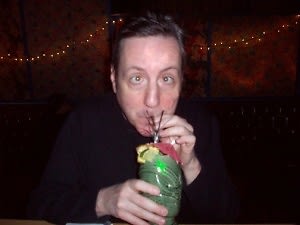 But still, the quota prevents him from achieving cherished "regular" status and its attendant perks (buybacks, having your usual order ready for you before your ass even hits the stool).

Similarly, Wombacher's gotta hopscotch around the city to meet his goal and satisfy far-flung readers. In his first week (he's been at it for about two months and 59 watering holes now) he went from the East Village to to the Garment District to Murray Hill to Chelsea to the Upper West Side. Those schleps not only wear you and your wallet out, but expose you to post-work happy hours in Murray Hill.

Wisely, Marty's itinerary revolves around dive bars that keep tabs in the low double-digits. Brilliantly, he's set up a PayPal account where readers can fund his stumbling adventures (expect this feature at Guest of a Guest soon).

And all those research funds could be forgotten if, like a shitfaced Julie and Julia, Wombacher's project is optioned for a movie.