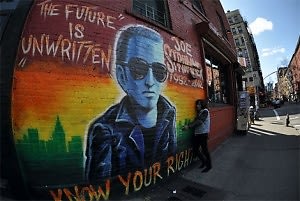 NYU's Arthur L. Carter Journalism Institute and the Times launched East Village blog The Local yesterday. Now the site must set itself apart from a slew of microblogs covering what is arguably NYC's most blogged about neighborhood and overcome an affiliation with the university cranky locals blame for its downfall.

The Local had the misfortune of going live at the peak of primary season, which is a fairly dry subject on the municipal level and has so far saturated the new arrival. But hey, there might be no better time to work out the kinks and have The Local in peak form for more colorful and important East Village affairs like, say, Santacon.

But The Local has its work cut out for it and no time to waste if it wants to stand apart from the roster of established blogs dedicated more or less exclusively to the East Village and Lower East Side. This includes Jeremiah's Vanishing New York, East Village Feed, Bowery Boogie, The Lo-Down, Slum Goddess, EV Grieve and EV Heave, which fills the particularly narrow niche of the Cooper Square "serial vomiter." Some of these offer straightforward coverage of the quotidian (hello, Community Board 3) while others are about editorial flair and individual tone. If The Local wants to compete, it needs to combine both.

These veteran blogs share more than a landscape and, in many cases, fear of the gentrification sweeping over it. There's also a common pest: NYU ragamuffins who swarm the East Village for nine months of the year and whose early fall arrival is documented as anxiously as a swine flu outbreak. Ever-expanding NYU itself is the unifying, monolithic enemy.The Carter Journalism Institute should escape the anger directed mostly at undergrads, particularly Tisch creatures.

One cool feature of The Local is its virtual assignment desk, which allows anyone in the community to pitch, or volunteer to write existing, story ideas. The question is whether even a dynamic neighborhood like the East Village has enough going on to keep its growing list of chroniclers busy while avoiding overexposure.