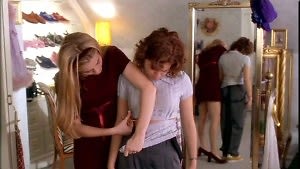 A message from your editor:

Over the last 6 months, things have been particularly exciting for our little "blog" that began as a hobby between friends. The changes, from our talented team members that have joined us, to the positive feedback and support of our community, are more than Cameron and I could have ever imagined a year ago. In the spirit of progress, it became clear to us that we were in dire need of a makeover. And the palms were, sadly, to be the first to go....

What began as a throw back to one of the greats, Bungalow 8, has since become a major source of confusion by many a guest of guestofaguest. When a new intern, upon inquiring and being told of the significance of the palms admitted he had never even heard of Sacco's gem, it was clear that it was time to let go. (In his defense, he was eleven when the club opened). Change is a good thing.

So, besides the palms being cut down, what else can you expect from our new facelift (scheduled to happen sometime Monday)? Here's a preview:

Easier browsing. Only care about nightlife? You can bypass everything else. Same for events. You can even change your rss feeds accordingly, neat huh?

Faster sharing. ADD is more rampant than ever before. Hopefully our new tools will help you get your twitter/facebook fix without having to move a muscle. Get spotted in our photo album? Send it to your Twitter feed and BOOM!..we hope to help break the bragging barriers.

Top stories will be, well, at the top. Who has time to figure out what they should be paying attention to? We'll tell you and automatically change these markers according to the number of page views they are receiving throughout the day.

Local Advertising. This is one of our most exciting features that we hope to be launching later in the coming weeks. It will give a chance for local businesses to use an automated system to buy various ads. It's going to be pretty slick.

Hmm, what else. Oh! We think that the site will be much more attractive on those pretty little eyes of yours. And, if all goes as planned, you won't even notice much of a difference at all. It will be like seeing an old friend for the first time since they've gotten their braces off and not knowing what was quite different about them.

We hope you check back all day Monday to browse around the new site. We can't wait to hear your feedback. We are also looking forward to celebrating our makeover with an intimate party tomorrow night.

As always, thank you for your continued support and scoops!