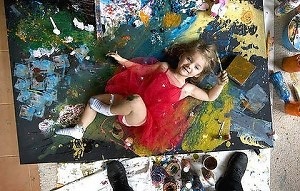 Remember when you were in kindergarten and would proudly presented your crayon on cardboard masterpieces to your mom?  And she framed them?  And then, last year, now 5-year-old professional painter Aelita Andre had a solo exhibition at Chelsea's Agora Gallery that sold out in seven days and put all your abstract work to shame?  Well, this pint-sized painting prodigy is back with another solo show at the Agora Gallery.

Entitled "Aelita Andre: Secret Universe," the exhibition runs from June 12 through July 3, with a reception this Saturday, June 16.  In a promotional video for the show, Andre paints in a tutu, her face covered in pastel stars and stripes.  Most of this year's featured pieces are priced around $5500, with some set to sell close to $13,000.  In 2009, one of her paintings sold for $24,000 at a Hong Kong exhibition.  Andre was only two years old when she completed the painting.

If you didn't know any better, you'd think she got into her mother's makeup drawer, took advantage of her new finger painting privileges and had an all-out rager in her rec room with her stuffed animals.  But if you keep watching the promo video...

As much as we'd like to think we were talented youngsters, we've got to give it to Andre - her work is pretty phenomenal.  Andre, who is of Russian heritage but currently living with her parents - also painters - in Melbourne, Australia, first gained recognition in the international arts scene at 20 months old.  Her colorful, abstract, acrylic and mixed media paintings evoke the works of, most notably, Jackson Pollock.  Agora's website notes that,

Aelita conveys her message through a bright, bursting palette and energetic splashes and dashes of paint. She works in acrylic, with occasional added objects such as toys like plastic dinosaurs, butterflies and penguins, and various other items, including even a microscope.

And although it may be tempting to explain away her command of color and craft as the exploited imagination of an average five-year-old, her commitment to her work - tutus aside - is undeniable, giving legitimacy to Agora's affirmation of Andre's "understanding of composition far beyond her years."

Go HERE for more information on her latest exhibition!  And if you're interested in purchasing one of her pieces, go HERE!