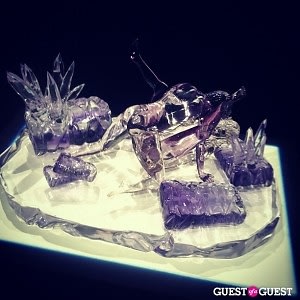 In the late 19th-century novel, À rebours, a French aristocrat flees from the decadence of bourgeois Parisian society to the countryside, where he retreats to an art world of his own creation. In modern-day New York, art collector Adam Lindemann has done the same.

Or at least, in spirit. This week, his gallery Venus Over Manhattan celebrated its inaugural exhibition, "À rebours," (translation: against the grain), which is inspired by this novel by Joris-Karl Huysmans.

And it was hard to escape the decadence. At the opening, luminaries like Anthony Haden-Guest and Stephanie LaCava sipped champagne and absinthe cocktails while admiring the eclectic collection, which includes over 50 pieces by artists such as Henri Fuseli, Gustave Moreau, Salvador Dali, and Odilon Redon, the favorite painter of the novel's protagonist.

Interspersed amid these works are curious tribal artifacts. A Jivaro shrunken head sits beneath an Andy Warhol portrait of American Indian Russell Means. Alongside are knives carved from animal and, yes, even human bones. There's also an 18th century Hawaiian chief's feather cape on display. 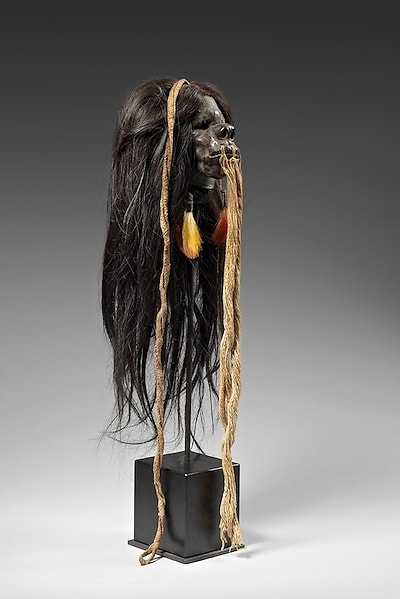 It's a ghoulish experience -- in the best possible sense. The space, located on the third floor of 980 Madison, was once home to a Vera Wang bridal boutique. But the virginal white walls have been stripped bare to a sheet-rock skeleton. And it's very dark. The majority of light comes from candles, artwork illumination, and the Banks Violette chair on fire in the corner.

If anything, it's the macabre that unites this widely-ranged exhibition. And sex. (A Glenn Brown painting on display, "Little Death," or "La Petite Mort," reminds the viewer of the grisly French expression for orgasm.) After all, the Venus Over Manhattan gallery was named after the sculpture of the Roman goddess which hangs on the building's facade. 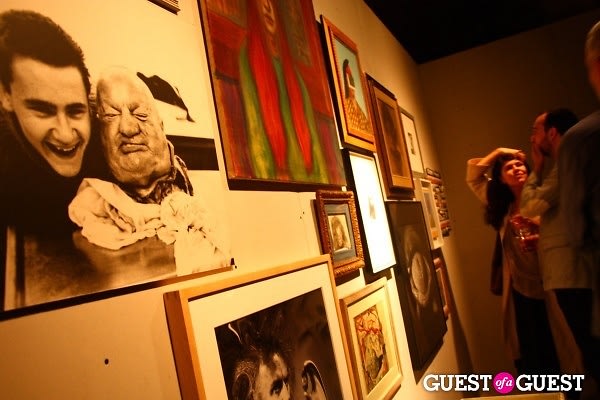 And love is certainly in the air. One of the more eye-catching sculptures, "Violet-Ice" by Jeff Koons, portrays an entwined nude couple in the moment before penetration. In the adjacent video installation, artist Lucas Samaras de-bones a chicken.

Through June 30 at Venus Over Manhattan, 980 Madison Avenue.

For our past coverage of this exhibition, including more images, go HERE.