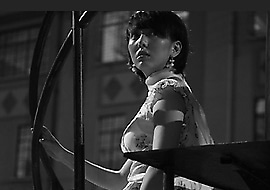 Beijing-born artist Yang Fudong, known for his painter's approach to the mediums of film and photography, is now on display at Marian Goodman Gallery. The exhibitions features two films, The Fifth Night and The Nightman Cometh, which explore the relationship between time, place, reality, and fantasy. Yang stated that the characters in his productions leave "a trace in the way a brush leaves a stroke on a long-roll painting." An additional photo exhibition pays homage to the Chinese "Modern Woman," and was shot at the International Hotel in Shanghai. Through April 28 at Marian Goodman Gallery, 24 West 57 Street, Room 301 Opening Reception: Wednesday, March 28, 6-8pm For more information, go HERE. [Photo via]
1 of 9