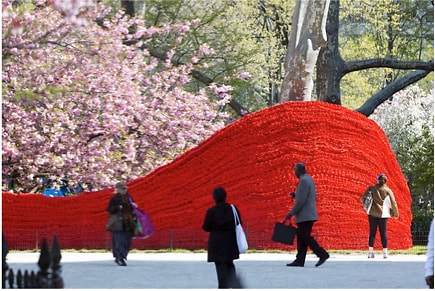 Over a million feet of layered, painted, and knotted rope debuted at Madison Square Park on Wednesday. Commissioned by the park's conservancy, the minimalistic yet massively large-scale piece challenges both viewers' conceptions as well as Genger's own role as a female artist.

"Red, Yellow and Blue encourages us to see the park in a new light and will make us think–exactly what contemporary art is supposed to do,"

Mayor Bloomberg said of the particularly "masculine" construction, which starkly stands out among the park's lush greenery, yet invites people to come outside, just in time for summer. When: Through September 8 Where: Madison Square Park [Photo via]
7 of 9