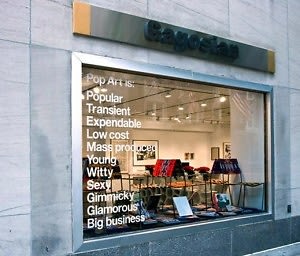 Larry Gagosian's flagship gallery, Gagosian Gallery, was opened at 980 Madison Avenue in the late 1980's. Since then, the gallery owner has been a regular at the Upper East Side cafe Sant Ambroeus, and he often can be found sitting at his regular table, talking with other people from the art world who stop by. But according to Gallerist, Mr. Gagosian's daily visit to Sant Ambroeus may be ending soon, when he opens a cafe in one of the storefronts at 980 Madison.

The cafe, which Gallerist first reported a few details about in February, will also have room for a gallery, and will be designed by Annabelle Selldorf. Selldorf has designed layouts for Gagosian Gallery shows in the past including the Picasso show at the gallery's London location (there are 11 Gagosian galleries around the world).

Gagosian is working with another big name to get his latest venture off the ground. Gallerist reports that an application filed with New York's Landmark Preservation Committee (980 Madison is considered part of the Upper East Side Historic District) reveals that Surf Lodge's Steven Kamali will be helping Gagosian with the cafe.

So far there's no word on when the cafe will open and what it will be called, but we'll be waiting for more details!