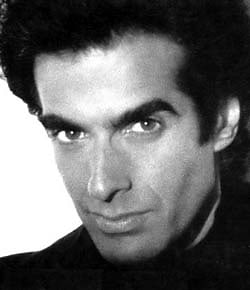 Some of you may have heard of The Houdini, a rather nasty little bedroom magic trick. Well now it appears that David Copperfield might have his own trademark bedroom trick up his sleeve (and in his sheets). Apparently a 21 year-old model has alleged that the crafty magic man tricked her into coming alone to his house near the Bahamas, and then raped her.

Whether true or not, the legal implications are unclear since all of the allegations occurred on Musha Cay (an island 85 miles south of Nassau, Bahamas), outside of the US. Nonetheless, a Seattle Grand Jury is investigating the matter, and the FBI has claimed jurisdiction and apparently raided Copperfield's magic museum in Las Vegas.

Anyone want to make an official definition for The Copperfield?  Or add to our list of possible headlines: