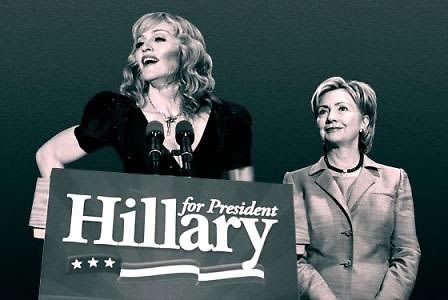 While Oprah is going around the country with Obama letting all the Iowan's know that she has "done her research", we were wondering which influential celeb would stand forward for Hillary.  I mean she already has her husband Billy on her team, but we're guessing having someone like, oh the Madge on your side would feel pretty pretty nice.  Last week, Madonna reported to WWD that she would be supporting her girl when asked who she'd be rooting for, and today, in Rush & Molloy's side dish she confirmed she would be helping Clinton "combat the Oprah-powered campaign of Barack Obama."  Bill Clinton's foundation has sponsered Madonna's charity work in Malawi, but NY Mag has come up with some reasons of their own as to why Her Madgesty may be siding with Hills, including their bonding over shared lesbian rumors.