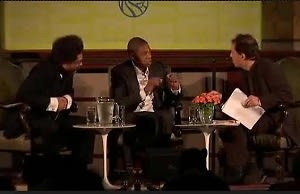 Jay Z did his auteur thing last night at the New York Public Library to promote his new book, Decoded. He spoke with scholar Cornel West, and the Library’s Paul Holdengräber about his life, his lyrics, culture, race and just what exactly the word "bitch" means.-

The discussion was a way of opening hip hop across generations and cultures and creating a bridge of understanding.  One of the major tenets of the book is that rap lyrics have literary value and are a form of poetry.

The Tipper Gores of the world who cry misogyny and sexism would be shocked to learn that while they may have 99 problems, a bitch aint one. "It’s a word that isn’t just referring to women, but all kinds of issues—like racist policemen," Jay-Z explained.

The song is actually about a guy who was pulled over on suspicion of weapons and drugs simply because he was black. While he wasn't speeding or doing anything illegal on the road, he did have illegal items in the car. Police wanted to search a canine unit, but it was busy on another job so they let him go. The bitch=A drug sniffing dog.

“I'm a big proponent of intent and not language and not words. Without intent, words are just symbols drawn together in some sort of way."

It's all about context, biatches.