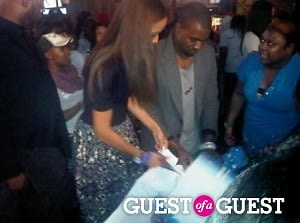 Kanye West traded rapping for wrapping last night during a New Yorkers for Children event at The Ainsworth. One thing we learned: He won't just take a compliment at face value. He wants evidence you mean it.

Kanye wasn't scheduled to appear at last night's event but showed up because "he was in the neighborhood." Coincidence or damage control for his rant against Taylor Swift during his Bowery Ballroom show he seemed genuinely happy to be there.

Kanye and Selita Ebanks were set up at one station to gift wrap toys. Surrounded by a large crowd, Kanye, who is surprisingly shorter in real life (5'8) than at least I imagined, had his body guard stand directly behind him with his arms raised at a 45 degree angle for the entire 90 minutes. Tracy Anderson take note, this is a workout. 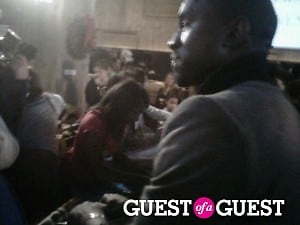 But just because Kanye was under protection doesn't mean he didn't interact with his fans. In the spirit of gift wrapping, he was in a shockingly jolly mood, taking photos with fans and joking around.

Be forewarned though, he won't just say "Thank you," if you give him a compliment as one girl learned. When an unabashed groupie exclaimed how much she loves his new album My Beautiful Dark Twisted Fantasy he asked, "Which song?" When she answered he demanded "Oh yeah, name more than just that song. Can you name two songs from the album?" She could, bringing a big smile to his face.