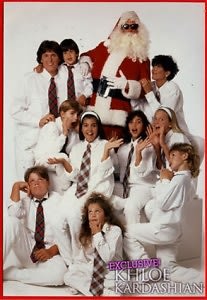 It's hard to believe that this is actually a Christmas card, and not a promo for some wacky 90s sicom a la Step by Step or The Torkelsons. Only the Brenner/Kardashians could come up with a Khristmas Kard This Kooky. I have no idea who about half of the kids are, so it's like they were written off after the first season for not being cute enough. The littlest kid, however, is clearly Brody Jenner, holding on to dad Bruce, who weirdly looks exactly the same. Kim and Kourtney or Khloe (any guesses as to which?) are in front, and the two kids sitting on the ground in front are so counting down the days til they turn 18 and never have to be involved with their family again. Merry Christmas, from the Kardashians!