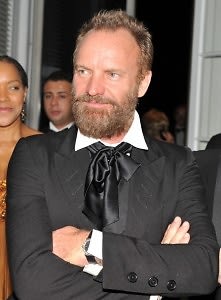 Who says those who can't do, write? Everyone's favorite British rock icon Sting has penned a holiday-themed blog, yes that's right people Sting's blogging. The musician teamed up with his friend and philanthropist Bobby Sager to tackle the subject of "giving" and their findings are available for all to see on ReadersDigest.com.

"With a poignant message about hope and encompassing the holiday spirit of giving, Grammy Award-winner and rock icon Sting enters the blogosphere for the very first time," said the magazine. "Sting's blog delves into a philanthropic cause that is close to his heart as well as his work with his good friend and philanthropist Bobby Sager."

Sting's blog, "Sting and Sager Deliver Hope for the Holidays," is the Readers Digest's first foray into celebrity blogging.

In his writing the rocker discusses a few of his charitable projects, including Hope Is A Game-Changer where he is having indestructible soccer balls delivered to kids in need. The goal being to give a child something that can't break or leave them, even in war-ridden areas of the world.

"Inspiration and positive change have always been a central part of the Reader's Digest brand, and we believe that Sting's message of hope will strike a chord not only with our readers but also with people throughout the world," Jonathan Hills, general manager of ReadersDigest.com, said in a statement.

So if you want to feel bad about your own contributions or lack there of, you can read Sting's blog at www.ReadersDigest.com/Sting.