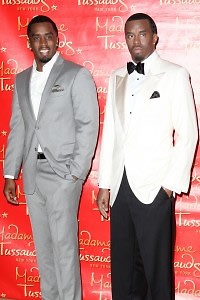 Yesterday at Madame Tussaud's Unveiling of P. Diddy's Wax Figure the only one looking sharper than Mr. Combs was himself.

Sean "Diddy" Combs unveiled his new wax figure to an intimate audience at Madam Tussaud's in Times Square. The music mogul was there with his multiple entourages including his Bad Boy employees, Sean Jean employees and his family, including his mother and son Justin.

As in all of P. Diddy's ventures he took his wax immortalization at Madame Tussaud's very seriously. His personal barber of years, Curtis "The Barber", was even consulted in creating the mock-up. During the unveiling Mr. Combs called up Curtis one final time to confirm they had got his "signature hair-style" right.

The statue is clothed in a replica of the outfit for his famous advertisement for the "I Am King" fragrance.  A white dinner jacket by Battistoni, black dinner trousers by Jones, New York, a white tuxedo shirt by Hugo Boss, black shoes by Ferragamo and a black bowtie, cufflinks and shirt studs by Pronto Uomo.  If you get there early and take a sniff of the figure at Tussaud's you might even pick up the sent of "I Am King", which Diddy's people made sure the museum had.

They've got the likeness posed casually in a standing position with left hand in pant pocket. Somehow they gave the figure that air of Diddy swagger, as if to say "I'm not impressed" or "no, you can't work for me." The statue is on display now on the second level of the Tussaud's. 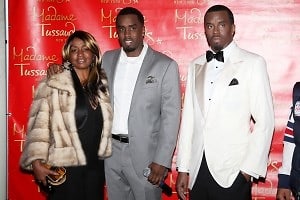 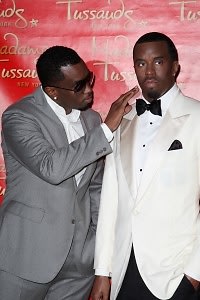