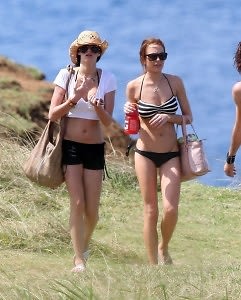 Lindsay Lohan was back at 409 West 14th last night, but this time she skipped SL (her favorite haunt with Samantha Ronson) in favor of Abe And Arthur's, where she celebrated sister Aliana's thirty-third sixteenth birthday. And she did not come alone.Lindsay took new boyfriend Adam Senn of "The City" to the intimate birthday dinner. He and Lindsay have a lot in common, like smoking; apparently, they took more smoke breaks than anyone else, which, for a Lohan family gathering, is saying something. The two were so into each other that they hardly seem phased by the huge fight between Ali and Dina, or by Dina's excessive drinking.

After the rest of the clan left, Lindsay and Adam stayed on and enjoyed some quiet time away from the utter insanity that is her family.  Perhaps this is the reason Lilo has been spending so much time in the city? She's been spotted at Butter earlier this month (albeit with ex Ronson).