The holiday season has its share of lavish parties – some exist for the highly legitimate purpose of providing an excuse to dress up, others for an actual cause. Last night’s WITNESS’, co-founded by Peter Gabriel, Focus for Change Benefit Dinner & Concert at Roseland was definitely the latter. 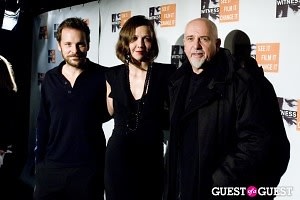 Peter Gabriel did not grace the stage as a performer, although he said he was looking forward to a duet between Crow and reggae legend Jimmy Cliff.

WITNESS provides training and support to individuals and groups to employ video to document human rights abuses. It’s not often that Tiananmen Square and Neda Agha-Soltan are discussed on the red –or more appropriately in this case, black – carpet. But last night they were brought up by guest and presenter Maggie Gyllenhaal – accompanied by similarly be-voweled husband Peter Saarsgard – as examples of the power of images to effect change.

“I think video impacts you in a different way,” she said. “I think about the Tiananmen Square massacre and being eight or nine years old and seeing that man standing in front of those tanks and being willing to risk his life for what he believed in and that did change my life. Or Neda, the woman from Iran who we saw killed last year.” When asked about her brother Jake’s love life, she was less effusive. “He’s an adventurer,” Saarsgard offered.

And how did Thanksgiving at their well-appointed Park Slope brownstone go? Especially given that 29-year old Jake Gyllenhaal reportedly attended with his new girlfriend, 20-year old Taylor Swift, she of the doe eyes and angsty lyrics about being ugly and awkward?

“It was great,” was all Gyllenhaal offered, as both she and Saarsgard visibly closed down and quickly moved on. 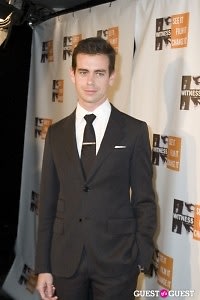 We also caught up with Jack Dorsey, the unfairly attractive co-founder of Twitter, who waxed lyrical on freedom of speech.

We felt so empowered, all of a sudden. But we had to know – does he ever not interact with technology? Might he, say, read a book? The answer is yes, but on the iPad. No musty books for the co-founder of Twitter! Turns out he’s reading Alain de Botton’s The Pleasures and Sorrows of Work.