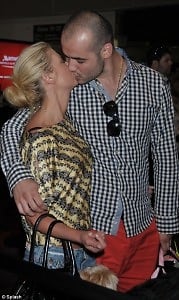 You probably awoke to dozens of headlines this morning proclaiming that walking booze zombie Tara Reid had gotten hitched in Greece to Danish biz guy Michael Lillelund.  The star tweeted she was engaged. Then, an hour later that she was married and her rep confirmed the name to People. Seems her rep has no idea what's going on.  She didn't marry Michael. She married a different guy.

Michael denied the news this morning to Star Lounge, stating he had not talked to the American Pie actress since February and that he was in the Hamptons with his current girlfriend.

"If she has married, then she hasn’t married me, that’s for sure."

Tara was slow, but has used Twitter for damage control, taking to the social networking site to tell her followers "His name is Zack Kehayov." She was spotted with him last month and at the airport last week.

Tara has been through a lot as the poster child of botched surgery and what happens when you drink too much, both on her alcohol-laced show Taradise and in real life. We hope this marriage signifies she is ready to move on to the more mature phase of her life. * 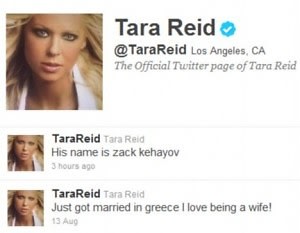 *Tara's next scheduled project is Celebrity Big Brother UK along with Pamlea Anderson and Bobby Brown. So maybe after that wraps...