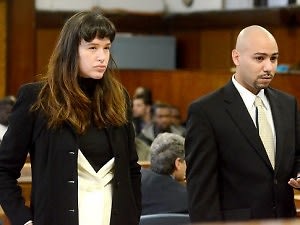 Paz de la Huerta, known for nipple slips and drunkenness as well as her role on HBO's Boardwalk Empire, is headed to court today where she plans to plead guilty to threatening The City's Samantha Swetra at the Boom Boom Room in a cat fight every reality show producer ever regrets not having captured on film.  What sort of sentence is she looking at?

As far as the story goes, Paz punched Samantha, who was there partying with Lindsay Lohan, in the face. She, as is her signature style, had a breast  "hanging out of her dress," when this happened.  She also threw a glass at Swetra's leg, which shattered. "Lindsay was pulling shards of glass off of it," reported Gatecrasher. [Paz De La Huerta Charged For Brawl At The Top Of The Standard]

Sounds pretty intense. But because celebrities, no matter how minor or how out of hand never have to actually be held accountable for their actions, she is getting off easy. While something like what happened could be a 3rd degree assault, a misdemeanor in New York, with a a maximum penalty of one year in county jail, she negotiated plea reports the New York Post.

Paz is only on the hook for harassment which is a violation and not a crime, which means she'll have to pay a fine and do a day of community service.

It will be the next time this happens or the next time, or the time she actually shanks someone while completely topless in the hot tub of Le Bain that they'll give her rehab or house arrest.