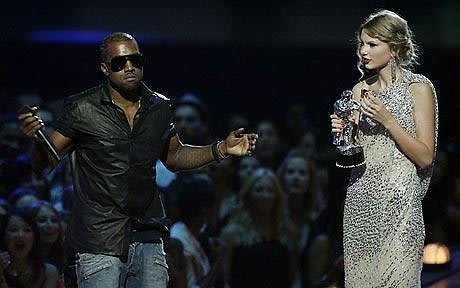 The biggest moment of the VMA's last night was obviously Kanye's interruption of Taylor Swift's acceptance speech. But was the moment that set the Twitter world afire as genuine as MTV would like us to think? We, for one, are skeptical. Click below for our reasoning...

First of all, the MTV is famous for shocking/scripted moments: remember the whole Eminem/Bruno debacle at the MTV Movie Awards?

It's no surprise that Kanye had an outburst; it's what he's built his career/persona on, and it's impossible to think that this move wasn't carefully calculated on his part. Additionally, he and Taylor Swift share the same agent. Perhaps this agent was shrewd enough to sense an opportunity to make both of his clients (including one who hasn't gotten THAT much publicity in her early career) the talk of the evening. And obviously, the incident worked out really well for Beyonce as well: at this point in her career, she gets more headlines by acting the gracious diva, rather than just adding another award to her shelf. (Beyonce winning Video of The Year would not have really made news without the Taylor Swift moment.)

We asked The New York Times' Brian Stelter, who was at the VMAs, to weigh in:

"The story arc couldn't have been written more perfectly. The conflict teed off the show, created tension for two hours, then concluded when Beyonce invited Taylor Swift back on stage for a proper acceptance speech. Staged or not, there must be a good bit of back-patting at MTV's headquarters today." 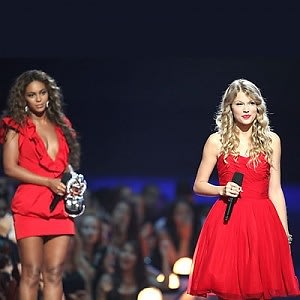 The ending image of Beyonce and Taylor, both in red dresses, perfectly playing the roles of diva and grateful ingenue, seems too perfectly planned out to be completely genuine. And of course, because of what happened, MTV got a huge spike in viewership for the West Coast airing.

So, touching? Yes. But spontaneous? We highly doubt it.