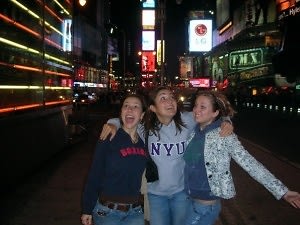 64,000 freshmen are moving to New York City in the next few weeks to start college. 64,000 eighteen year olds, navigating the subway, looking for bars that don't card, overrunning St.Mark's. Welcome to Part 1 of our five part guide on how to survive your college years in New York.-

Don't spend your Freshman year intimidated, overwhelmed, and hiding out in your dorm room. We'll show you the ropes, tell you what to expect, where to hang out, and what to avoid. You'll go from timid transplant to self-possessed, bratty NYC college kid in no time!

Let's start out with the Basics, ok?

First things first: see that gaudy lanyard dangling around your neck? The one that holds your student I.D. and your keys, and possibly your metro card? GET RID OF IT!

Wearing a lanyard with your ID around your neck basically screams, "HELLO! MY NAME IS [Full Name] FROM [City that isn't New York]! THIS IS MY FIRST WEEK HERE IN THE CITY, SO YOU SHOULD PROBABLY HECKLE ME/TAKE ADVANTAGE OF ME/MUG ME. THANKS!"

You're an adult: you can place your ID and Keys in your wallet/pocket/purse and not lose it, like a normal person. And even if you do lose it a few times, at least you won't look like such a...freshman.

The great thing about college, and especially freshman year, is that everyone is looking to make friends. 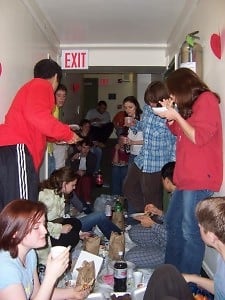 You'll probably never again in your life meet SO many people in such a condensed period of time as you will during Freshman Orientation. You probably won't end up being friends with 90% of these kids. That's ok! You need someone to eat lunch with in the interim, before you find your real crowd.

Some things to remember while meeting people:

Be friendly! No, really. Now is not the time to try some "cool New Yorker" affectation.

Your SAT Score should not factor into any conversation. Ever.

The super perky RA who is making you tell something random about yourself based on what color skittle you pull out of a bag during your dorm orientation? You reealllly want to be nice to them. They are the ones who will or won't get you in trouble for setting up a slip n'slide in the hallway.

If people tell you they're from someplace like Ohio or Nebraska, don't be a total brat and laugh/make a face/comment on that. You've been here a week, you're not a snobby New Yorker yet, just a jerk.

If at all possible, avoid the mad rush at the bookstores the first week of school. (Unless you WANT to spend 45 tense minutes standing next to your Dad, waiting in line, with 10 pounds of books in your arms.) You don't REALLY need your books until the second week of classes, and by then the lines will have died down. Also, don't feel pressured to buy from the student bookstore! Here are some cheaper options:

The Strand, 828 Broadway, New York The Strand will have basically every book you could need, 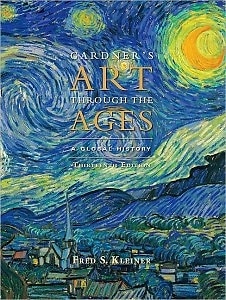 especially for Western Civ, World Cultures, and ConWest courses. Also, their totes and messenger bags are cooler way of carrying your stuff than the monogrammed Jansport backpack your mom got you.

Book Culture (also known as Labyrinth Books) 536 West 112th Street If you're a Columbia student, you'll probably purchase about half your books here: they've got it all.

Shakespeare & Co (various locations): If you're a drama student in New York (and we're guessing that probably makes up for about 60,000 of the 64,000 freshmen...), you'll want to use Shakespeare & Co as your main resource for published plays and books on theater.

And don't forget good ol' Amazon! Gardner's Art Through The Ages, a staple of Art History 101, which will cost you $184 at the NYU bookstore, can be found for $108 on Amazon.

Most college dorms maddeningly use Twin XL sheets, and then try to sell you really uncomfortable versions in your school colors. Don't fall for it. Buy your sheets at home, if possible, from literally any retailer.

On Partying During Orientation Week

If you didn't drink in High School, and don't plan on drinking in college (and "plan on" is really the operative phrase in this sentence...), that's cool, don't feel pressured to do anything you don't want to do, etc etc etc, BUT, please keep this in mind: Just because you don't drink doesn't mean you can't go to parties! It's much much better for your social life to go to the crazy party and stick to soda than it is to primly sit in your dorm room with a book. Honestly. Take our advice on that one.

If you did drink in High School, and fully plan on building on that foundation in college: Don't overdo it the first week. That's just amateur.

Something for students to keep in mind: Most New York City freshmen dorms are "dry". So, you know.

Something for administrators to keep in mind: Who are you kidding with the whole "dry dorm" thing?

A few more things to consider your first week:

Unless you're going to class, don't wear your college sweatshirt.

Don't hang a tapestry you bought at a street fair on your wall for decoration. So boring, everybody does that.

Ditto any poster with Audrey Hepburn on it.

Don't heckle the celebrities who live across the street from you. 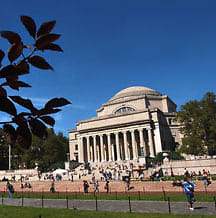 Don't buy an unlimited monthly Metrocard; you probably won't leave campus THAT much.

Free comedy shows? Usually not that funny. (Related: When someone asks you "Do You Like Comedy?" in Times Square, don't waste your mental energy thinking of a really funny, clever retort. They've heard them all.)

You get discounted tickets to EVERYTHING in this city: museums, plays, movies, you name it. Take advantage!

And bad news for NYU Freshmen: sadly, no, this isn't Gossip Girl.

Coming This Week: Where To Party, Where To Study, And Other Tips For New York Collegiate Life