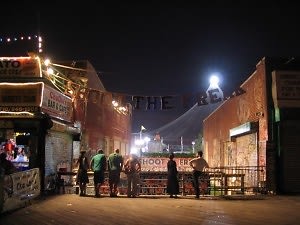 Turns out the documentary Last Summer at Coney Island was even less premature than originally thought. It's been a rough week for the storied amusement park, or at least its inimitable boardwalk, which is about to get a lot less freaky. And maybe even lose its signature freak. -

There are very few places in the city where I'd argue against a Shake Shack satellite. But the Coney boardwalk is one of them. And while it wouldn't hurt to have the choice between a Shack burger and a Nathan's dog, the rumored expansion of the Danny Meyer chain to the boardwalk could put an end to its unique flavor.

Whispers about a Shake Shack (and Atomic Wings) outpost come on the heels of reports that 11 boardwalk businesses could get the boot if they don't submit new business plans to Zamperla, the park's new operator, by the end of the month. Among the endangered species are beloved oddities like Shoot the Freak (in which you fire a paintball gun at a live human target), Cha Cha's bar (in which one slightly inebriated patron told me last week, "You're in the deep end now, boy. And the sun will be down in an hour"), Beer Island and Ruby's.

Zamperla chief Alberto Zamperla explains that ""If you want to improve an area, you have to bring in something new." But although Shake Shack and Atomic Wings would be new for the boardwalk, they're old news elsewhere in the city and unlikely to lure customers to the tip of Brooklyn on their own.

The successful Luna Park suggests that Zamperla does have Coney Island's best interests at heart. But going forward, the developer should remember that New Yorkers go to Coney Island to get away from the increasingly generic city, not to replicate it.