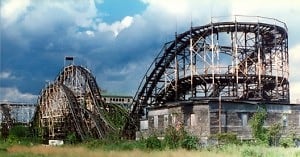 JL Aronson's documentary Last Summer at Coney Island premieres at BAM Cinemateque tonight. And just because viewers could follow the screening with a trip to the fabled, faded theme park doesn't mean reports of its death are greatly exaggerated. -

The movie, or at least its trailer, doesn't pinpoint a specific summer as Coney's final season. But the title isn't necessarily hyperbolic. It hammers home the idea of Coney Island as a state of mind, unique to each visitor and threatened by the park's constant evolution.

Some might say the summer of 1945 was Coney's last. The rapid rise of the automobile, the suburbs and air travel that followed and allowed trips to further flung escapes led to Coney Island's initial decline. The abandoned husk of the aptly named Terminal Hotel is one of the few reminders of Coney as New York's premiere summer beach resort.

As the neighborhood, and city in general, eroded over the next 25 years, the park became a symbol of New York's desolation. The Warriors might have spent an entire movie trying to get there, but it was a tense, lonely commute. When the city's fortunes pulled a 180 and gentrification washed over much of Manhattan and Brooklyn, the ruined Coney Island became a place that nostalgic types wanted to remain in shabby decrepitude. In 1983 the Mermaid Parade landed on the boardwalk, and the era of Coney Island being celebrated as a stronghold of urban eccentricity began.

Obituaries like Aronson's have been coming for at least five years, as mega-developer Thor Equities and the city competed to save the flailing peninsula. The first major step in the planned revitalization arrived with Luna Park this summer. Named after one of Coney's original theme parks, Luna has delivered the usual combination of rides, games and eclectic crowds.

So far, the glitzy casinos, condos and high-end hotels proposed by Thor haven't made Coney yet another island of wealth in NYC. The freaks still perform at the sideshow. And they look like J. Crew catalog models compared to some of the characters roaming the boardwalk or drinking at Cha Cha's.

Coney Island has retained its grit despite Luna Park's modest infusion of gloss. Aronson's title isn't a strictly literal one, but like the park visitors at the end of its trailer, still packs a punch.