Hipster cop recently spoke to the New York Times and revealed a little about himself.

Rick Lee, otherwise known as Hipster Cop, is a NYPD detective who has been working overtime, seven days a week at the Occupy Wall Street protest in Zuccotti Park.  It is his job to act as liaison between the police department and the protesters. Hipster cop recently spoke to the New York Times and revealed a little about himself. 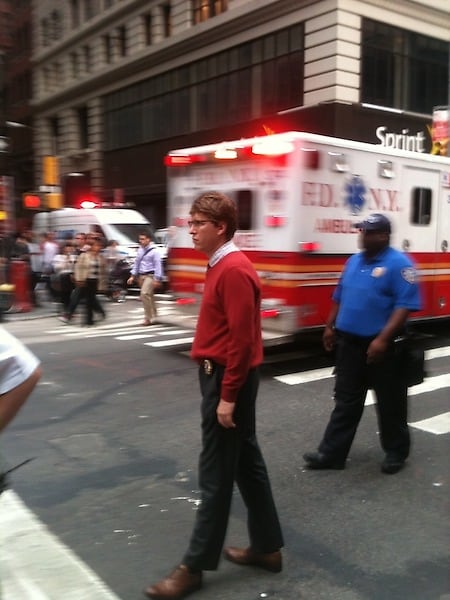 - Detective Rick Lee is 45 but looks much younger. - He wears skinny jeans when off duty. - His friend that works at Ralph Lauren hand tailors his suits. - He likes organic food. - He listens to Radiohead and the Killers. - He lives in Staten Island. - He is slim, with a shaggy hairstyle and cool-nerd eyeglasses. - His wardrobe usually includes cardigan sweaters, Barbour jackets, wool socks and thin ties to go along with his skinny trousers. - He's single - apparently he asked a protester to dinner. - His eyeglasses are actually Ray Ban sunglasses for J Crew which he modified by popping the lenses out and replacing them with his own prescription. - Apparently, he's been called "Hipster Cop" for years as a way of identifying who he is to people who don't know him. All in all, pretty much basic hipster characteristics - except for the part about him living in Staten Island. I think that little tidbit threw all of us for a loop.
1 of 7