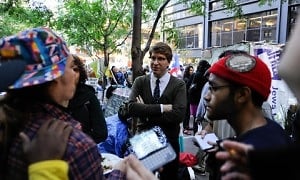 [UPDATE: GQ interviews the Hipster Cop. HC disagrees with his "Hipster" title. See slide show.] The evening Osama Bin Laden was announced as dead, I decided to make a trip to the World Trade Center site and film people's reactions. About 20 hours into my coverage (with no sleep and no coffee), I decided to go into stealth mode and go behind police baracades for the "money shot." Did you know you can get in big trouble for that? Hipster Cop saw the incident and came to my rescue like a true Clark Kent disguised as Superman, and told his cop friends that it was ok for me to shoot.

Hipster cop saved me (and my footage) from trouble - and now he's apparently helping out the protesters at Occupy Wall Street. Swoon.