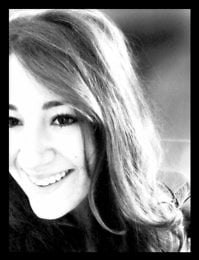 While most people in the fashion industry are eager for any form of publicity they can scrounge up, this certainly does not ring true for Britt Aboutaleb, the associate editor for Fashionista.com, the style website with the cult-like following. When a picture of the 24 year-old popped up on Altamira only months ago, the responses, while all positive, were ones of "Oh, that's what she looks like!". And her PMc count remains at a low 5 pictures, despite the countless events she attends every week for her high profile job. So why does the adorable young editor shroud herself in an air of mystery? It's certainly not due to a lack of style. Nor a lack of shyness - Fashionista.com is known for their "Life With" feature, an interview section of their site that takes an in-depth look at professionals and individuals involved in the fashion industry, with each lengthy one-on-one usually conducted by Britt. So why the hide-out? I certainly wondered before meeting her myself (to the point of a lengthy Google-image search). The fashion maven who gives me a run for my money, and has taught me more than a trick or two, would rather let her work speak for itself. And trust me - it definitely does.

After a stint at Stella McCartney working the ropes in PR after arriving in New York City, Britt had one of those fateful nights: A meeting with Fashionista founder, Faran Krentcil. The run-in occurred almost two years ago at the Kate Moss for Top Shop party at Barney's. Starting as an intern, Britt has seen many changes within her span at one of the most popular fashion sites. After Faran's departure to Nylon, and Britt's position switch to associate editor, she's attended the last two season of New York, London, and Paris Fashion Week for Teen Vogue too. Jealous? We know we are. 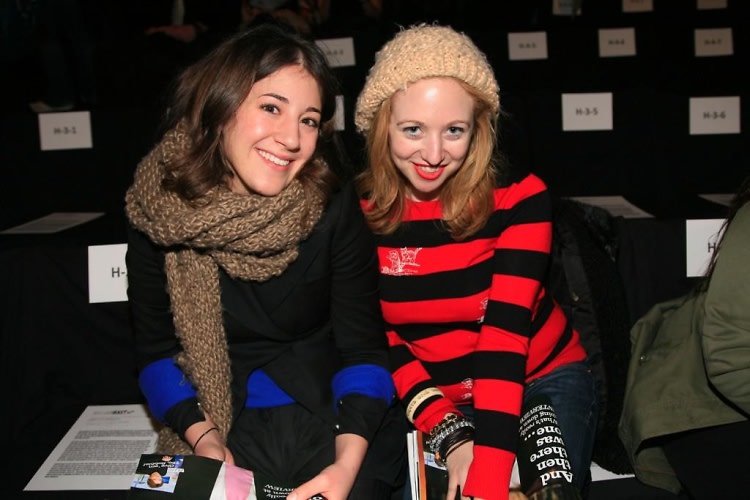 [Britt Aboutaleb and Faran Krentcil at the William Rast show in February 2009. Photo via PMc] 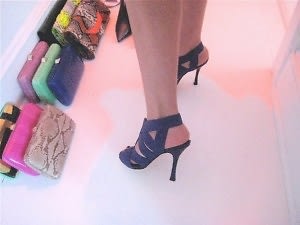 In between jet-setting to fashion weeks and being a crucial part of a major fashion site, Britt Aboutaleb also has a killer sense of style. Whether she's pulled on a pair of skinny black Jet jeans, J.Crew flats (she swears they make the best) or her favorite Topshop piece, she mixes high and low easily. Unlike her magazine editor counterparts, Britt gets to reap the benefits of a low-key work environment which translates to a laid-back wardrobe as well. This may be how she become such a pro at DIY distressed denim, and we're pretty sure she'd give even A&F a run for their money with a cheese knife. While she may not be the type to model herself after a particular icon, her love of Gwyneth (and of GOOP, for that matter) is obvious. Not surprisingly, the San Francisco native knows her designers, and list her favorites as Chris Kane, Vivienne Westwood, Rick Owens, Alexander McQueen, and Stella McCartney, just to name a few. Feeling just as comfortable in a pair of towering heels as she is in her stylish yet well accessorized casual wear, Britt easily gives other industry fore-runners a run for their money in the style department. [Photo: Britt Aboutaleb in Montauk over Memorial Day Weekend for Social Life Magazine dinner] 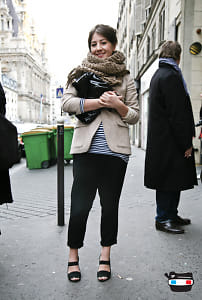 Almost as impressive as Britt's closet is her archive of fashion knowledge. Whether it be identifying a veteran runway walker or an international editorial spread, Britt's knowledge of models, labels, and designers seems endless. Even though the Boston University grad holds a degree in English, it seems as likely that she would have one in fashion history, due to her ability in remembering the ins and outs of designers in fashion houses. Her interns have admitted to making "model" flashcards pre-interview to stay on the ball - quite a Devil Wears Prada type scenario for dealing with a girl whose voice is even sweeter than she looks. Surprisingly enough though, she has yet to wring my neck for mistaking Roger Vivier for Alaia in the NY Times (I swear I didn't get a look at the soles), but I have probably picked up more fashion jargon and wisdom from her than working in any job previously.

Britt's job obviously has its perks, and another one is her favorite feature (mentioned previously), "Life With". So has who has been Britt's favorite interview so far? It was basically impossible for her to say. Afterall, she has interviewed some of the industry's top designers, stylists, writers, and even the Olsens' hairdresser. But if she just had to pick (and yes, I was forcing it out of her), she would pick two. First, Mickey Boardman, the editorial director of Paper Magazine, was on the top of her list due to is never-ending list of accomplishments, and his chatty personality. Next, is Keegan Singh, the super-stylist who is "just so f***ing cool".

Even though it may look like fashion is the main focus of Britt's life - the clothes, the shows, the events - for Britt, it's really more of a passion (and a career). A pick-up game with her club soccer team, a beer at the Brooklyn Brewery, traveling with her family that's now relocated to Qatar - these things are all just as, if not, more important to her than the nighttime events that keep her daytime job afloat. So while it's refreshing to see someone so different in an industry filled with fame-whores and money-grubbers, Britt Aboutaleb can't hide forever. So while the fashion world becomes more and more enamored with the girl who's been ducking the cameras for the past two years, I'll keep calling her up for tips - until she forgives me for that Roger Vivier/Alaia slip, that is.