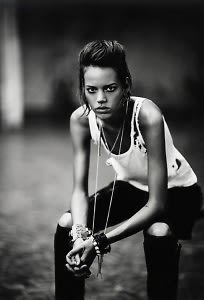 Danish fashion model, Freja Beha Erichsen, definitely hasn't been far from the top for a number of seasons now.  This summer Freja has been landing magazine cover after cover like Vogue Paris, Vogue UK, and i-D covers in the last couple of months.  Stirring up the world of fashion with her androgynous looks and bad girl edge, she's been on close watch.-

This 22 year old has been the face on every large fashion magazine and on top of that Erichsen has landed many of the Fall 2010 campaign ads, appearing in Chanel, Valentino, and Tom Ford eyewear ads.

Not like it's a big deal or anything, on top of everything else she is also apart of the Balenciaga 2010 Fall Campaign.  Also appearing in this campaign shot by photographer Steven Meisel are Karen Elson (also fronting for Louis Vuitton this season) and Stella Tennant (who is moonlighting for Salvatore Ferragamo Fall 2010), Megahan Collison, Eliza Cummings, Valerija Kelava, Mirte Maas, and Julija Stepanoviciute. 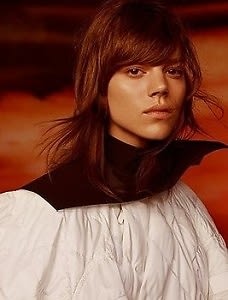 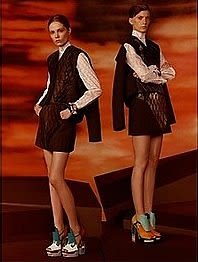 When Freja Beha Erichsen isn't gracing the runway with her long legs or posing for ad campaigns and magazine shoots, she's just like any other typical supermodel.

Currently Living in New York City, she was spotted out and about in SoHo earlier this week accompanied with a friend and greeting photographer Terry Richardson on the sidewalk.  Freja Beha Erichsen was wearing black high-top sneakers, skinny jeans, and a white t-shirt.  We'd like to say that her favorite color is black, but she does manage to pull it off quite well. 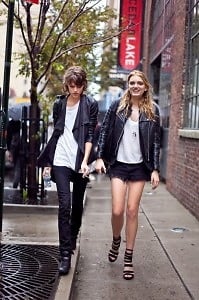 Even models deserve a day off every now and then.  Here Freja Beha Erichsen struts her stuff  with fellow model Lilly Donaldson, in her signature black skinnys, white tee, high tops, and a chic black blazer. 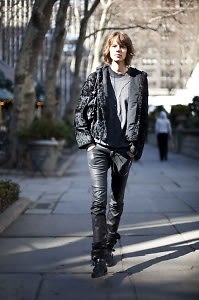 Overall this up and coming model has a edgy but yet cool androgynous appearance, with a baggy jacket, layered tee's, and motorcycle boots. 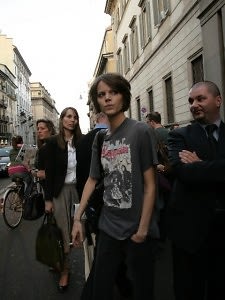 Erichsen enjoys listening to the music of PJ Harvey, the Danish group Kira and the Kindred Spirits, Janis Joplin and Jeff Buckley, but here she can be seen wearing a vintage Led Zeppelin t-shirt. 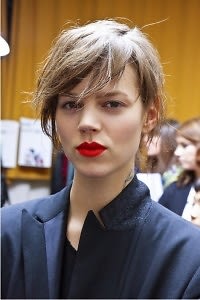 Never smiling in her pictures, Freja Beha Ericsen makes up for it with her striking simplistic beauty and luscious red lips.  And despite her hectic career, this on the go gal still manages to look fabulous in her every day life! 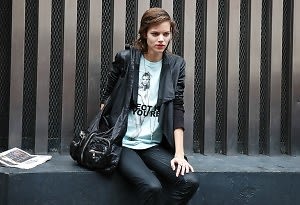 Outside the Jonathan Saunders Show

Although none are visible here, Erichsen is notably known for her 16 tattoos (the first in which she got at the tender age of 16).  She says that her tattoos do not affect her work and are easily concealed. 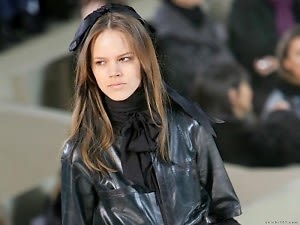 Way back when Freja was starting out she made a deal with her agent that she could have as many tattoos as she wanted,  just as long as she didn't cut her hair.  Well, she did end up cutting her hair in 2007 after establishing herself in the fashion industry, but her tattoos stilll remain and so does she!

So, she may be ranked at #2 on models.com, but her climb up the Fashion ladder of fame won't stop here.  You'll be seeing a lot more of this Danish model with a bad girl edge in the up and coming seasons. 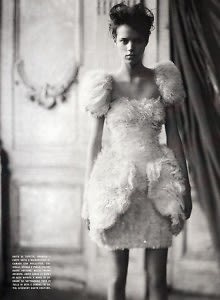