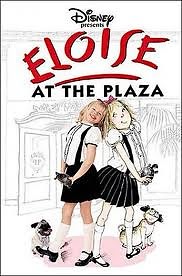 NPR has a great report this weekend on Kay Thompson, the jack-of-all trades creator of the Eloise book series. Here's what every aspiring socialite should know about the history of Eloise's maker.

From a brief focus group of friends, I've gleaned that Eloise, in her Plaza-dwelling, champagne-sipping, fur-wearing ways, provides the Ur-conception of aspirational glamor that girls cling to through early adulthood and beyond.

Filmmaker Sam Irvin's fascinating new biography, Kay Thompson: From Funny Face to Eloise, is ripe with information on Thompson and the set of circumstances surrounding the origin of the storybook six-year-old. Here are five essential nuggets:

1) Thompson, in addition to her book-writing prowess, was a legendary vocal coach to Frank Sinatra, Marlene Dietrich, and Lucille Ball.

2 )She didn't just stick to pretty pink dresses and chiffon; she made women's pants a high-fashion item.

3)After being rejected by MGM time and again, Thompson starred in her own cabaret in 1947 with the Williams Brothers.

4) Thompson spoke like a child herself, affecting the disposition and persona of a pampered six-year-old

5) The actual beginning of the tale of Eloise has a fascinating, if apocryphal, back-story. Irvin says: "

"The official PR story which was always concocted was that Eloise sort of came into spontaneous existence in 1947. Kay was late to a rehearsal with the Williams Brothers, and she drove across a golf course in order to get there as quickly as she could, and when she got there they said, 'Who do you think you are, being five minutes late?' and she supposedly broke into the voice of a little girl and said, 'I am Eloise and I am 6!' "