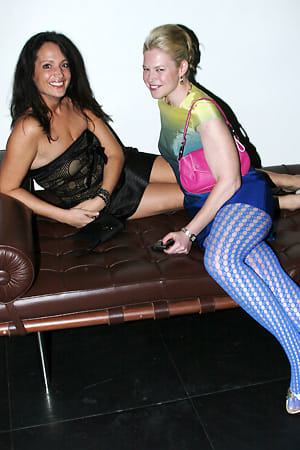 First there was Emily Brill's much sought-after scathing Page 6 piece calling her a "society outcast".  Then there was Emily's first rebuttal.  Then there was her second rebuttal, in which she claimed to know the identity of the anonymous "Grande Dame" who threw her under the bus in the Page 6 piece.  She profiled this Dame, and had the following to say about her short of actually naming her:

This ‘grande dame’ epitomizes a way of life  for the ‘older’ set of women on the New York scene. Her dire financial situation-she’s quite vocal about it–was even the inspiration for the term “fauxialite” later this spring (I didn’t come up with it!). She, like many women I’ve met in this world, rises each morning with one goal in mind: to hold on. “But I’m press, dahhhling…” (press?) This sense of entitlement is one of the things I found most astonishing when I first started going out...

We're not sure if Emily's goals are any different.  But our curiosity was piqued, and we emailed Emily to see if she would put a name to a profile.  She wouldn't.  But a tipster did.  The Grande Dame is none other than socialite Emma Snowdon-Jones:

"Emma Snowdon-Jones is the grand dame mentioned in the page six article on brill.  Though decades older than her, they clearly are around the same stage in their social development"

It hasn't been a great couple of weeks for Emma since her email gaffe in late August.  Maybe October will be a better month?