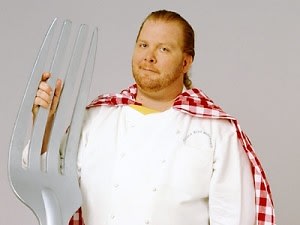 We know, we know, no politics at the dinner table.  But after taking a look at Downtown for Democracy's "Dining for Democracy" line-up, we may make an exception.  This summer, the alliance of progressive professionals in the arts and media will be hosting a series of benefit dinners. In addition to fabulous hosts offering up their homes for the evening, the six dinner parties will also feature special guest speakers and top-chef fare.

The series kicks off on July 11 at Sarah Sophie Flicker and Jesse Peretz's Tribeca loft.  Diners will enjoy a three-course meal cooked by Mario Batali.  NYC Deputy Mayor for Government Affairs and Communications Howard Wolfson will be the event's special guest speaker.

Vinegar Hill House and Miss Lily's Restaurant chefs will, among others, also be participating in the series.  And for those with a sweet tooth, the series will close on August 8 with a three-course dessert dinner baked by an all-star batch of chefs from Le Bernardin, Momofuku Milk Bar and Del Posto.

Special guests at the dinners will include singer Adam Green; correspondent to The Nation magazine Ari Melber; and journalist, author and editor of The National Memo Joe Conason.

Proceeds will benefit Downtown for Democracy, which was founded in 2003 in order to garner support for Democratic candidates among New York's creative community.  Contribution levels range from $125 to $2000 per person, with capacity ranging from around 20 to several hundred dinner guests.  Organizing the series is Audrey Gelman - Scott Stringer's press secretary - and Bon Appetit Executive Editor Christine Muhlke.

Find out more about Downtown for Democracy HERE and RSVP for "Dining for Democracy" at info@downtown4democracy.com. 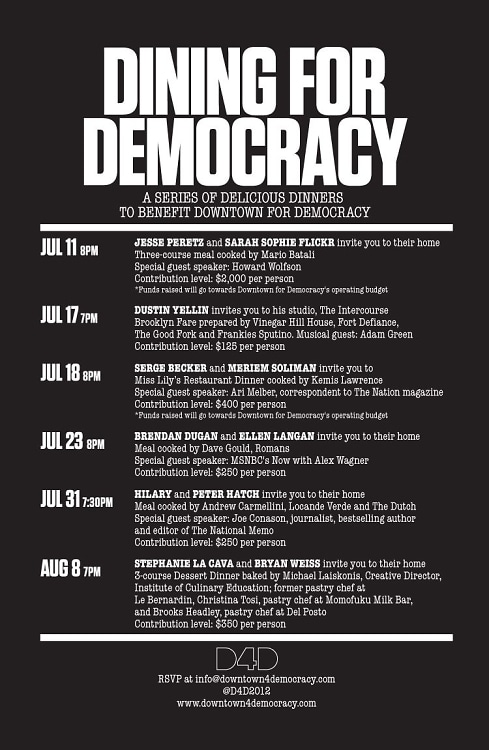