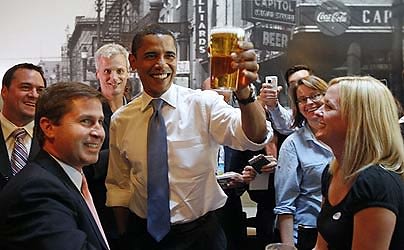 [Barack Obama raises a glass of Pabst Blue Ribbon at the Raleigh Times Bar in Raleigh, NC Photo via Reuters]

First there was Eric Asimov's piece titled "Modest Luxuries For Lean Times" [NYT] on September 23rd.  Then came "Wines For Tough Times" [WSJ] on the 27th by Dorothy J. Gaiter and John Brecher.  Next there was famed wine critic Robert Parker calling for a boycott of restaurants that unfairly jack up their wine prices in the "Wine Spectator" (most restaurants mark up wine to an exorbitant 200 to 500 percent) on the 29th, which prompted NY Mag's Grub Street to write a post titled "Good Wine In A Bad Economy."

Well today, the market's not looking to clean up it's act anytime soon, and, although winos at heart we may be, might we suggest PBR as a reliable alternative during these tough times?  Even Obama is advocating a CHANGE in our drinking style.