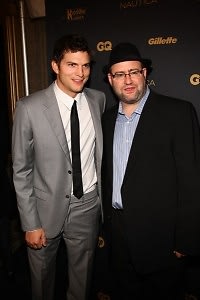 So, the invitations have been sent, and it turns out that Ashton Kutcher and David Arquette will be co-hosting this year's GQ Gentlemen's Ball, on October 27th at the Edison Ballroom. Who's up for a rousing game of "What's Wrong With This Picture?" We are!-

Gentleman, as defined by Merriam-Webster: a man whose conduct conforms to a high standard of propriety or correct behavior

David Arquette: called up The Howard Stern Show to air all the details about his separation from Courtney Cox.

Nothing against the Misters Arquette and Kutcher, but when it comes to exemplifying "Gentlemen", surely somewhere in New York there were some finer specimen?