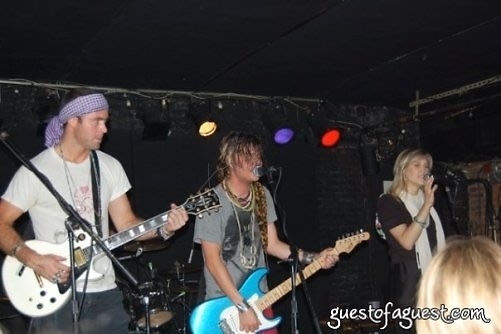 I didn't really know what to expect when I showed up at the Mercury Lounge to check out Blood St. I had listened to a few songs on their myspace page and liked what I heard but didn't know how the band sounded live, what kind of crowd they would bring in, and if the band was a crazy as they seemed in their photos.

The Mercury Lounge has probably never seen so many polos, sundresses, and designer labels in it's entire existence. By the look of the crowd you may have thought you were at a benefit or a soiree, but as soon as the band came on and the audience started dancing you knew you were at a great rock 'n' roll show with dedicated fans.

Blood St. played an eight song set and after screams of "Encore", "One More", and threats of violence, came out to do two more songs. Rebels, No Sun, and All Stressed were audience favorites and really had the crowd singing, dancing and rocking out. With E.B. Sollis on lead vocals and guitar, Erik Broberg on lead guitar, Matt Lally on bass, Steve Weitzmann on drums, and Marissa Bregman on vocals and the tambourine, Blood St. played a mix of rock songs, country ballads, and reggae jams.

The entire band is talented but Weitzmann really stood out on the drums and Sollis has such a beautiful voice he could have sang the entire set a capella. The band brought an energy that raised spirits and a wardrobe that raised eyebrows. Lally broke all sorts of rules by sporting neither a shirt nor shoes and Sollis proved that real men wear skirts and combat boots.

Blood St is quite a versatile band and if you like music you'll like them. Check out their myspace, learn the words to their songs and catch them July 13th at Piano's on Ludlow. They describe themselves as "a journey through Psychotheraputic Editorial Refreshment" and it sure feels good to be satisfied.