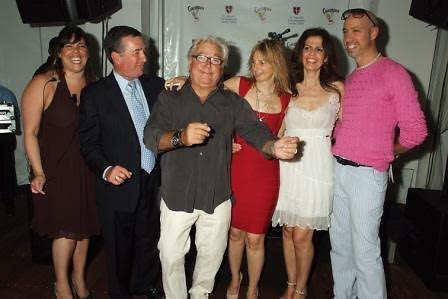 This Wednesday, on the rooftop of the Cornelia Day Resort on Fifth Avenue, a cancer-kicking fundraiser for Saint Vincent Catholic Medical Centers took place. It was to support breast care and well-being for the uninsured and underinsured. Hosted by Robert Verdi and Da Silvano, there was a live auction presided by Steve Schirripa and a guest performance by Tina Brown.

Click below for more story and more photos by Rob Rich:

Marisa Acocella Marchetto (our favorite cancer surviver who we met at the Pink Agenda's gala), established the Cancer Visen FUNd at Saint Vincent Catholic Medical Centers. She was diagnosed with breast cancer three weeks before getting married to Silvano Marchetto (of Da Silvano) and did not have health insurance.

As she was writing her graphic memoir, Cancer Vixen, she came upon this fact: 49% of the women who are diagnosed with breast cancer and don't have insurance have a greater risk of dying from the disease.