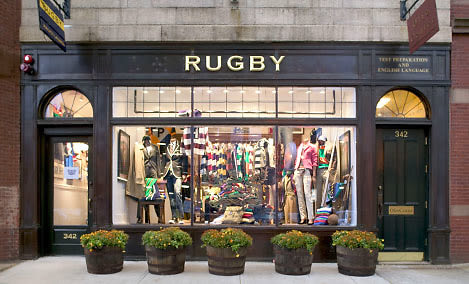 We were recently thinking about the Rugby Ralph Lauren clothing line that was launched by Polo Ralph Lauren and were trying to determine which niche Rugby is trying to fill. Their website says:

"A place where preppy Ivy League tradition compliments new styles to cultivate a rich sense or character and individuality."

Hmmm...this sounds a lot like the niche Polo has filled since 1967.  Its starting to feel like the late 90's when there was two Starbucks on the same corner.  It seems like Rugby is just plain cannabilism, eating into Polo's very own market.  Having perused most all of their stores (NYC, Seattle, Greenwich, Boston), we simply were not impressed.  In theory the line was supposed to compete with the likes of Abercrombie, and American Eagle Outfiters.  But alas, the prices are much higher, and no doubt can only be afforded by the Polo set.

The concept also seems a bit off.  Going for an edgier preppy look is contrary to the entire preppy style.  Prepsters are antiquated dinosaurs who where madra shorts, pastels, and whale pants, something that hasn't changed in decades.  The whole point of this style is that it doesn't change!