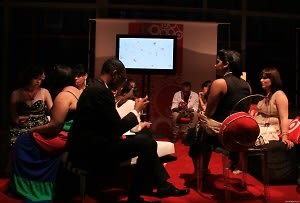 Monday night, the Oscars of the Fashion World, aka the CFDA awards took place...and FIT Fashion Institute of Technologyheld the first simulcast of the 26th annual awards. Footage from the event was projected during the reception and later a screening was held showing the award ceremony. The Council of Fashion Designers of America is a not-for-profit trade assiciation consisting of over 300 leading fashion and accessory designers. This event was hosted by Target who did an amazing job transforming the auditorium. There were Target themed couches, pillows and mirrored tables along with a DJ spinning everyone's top party picks.

Five different flavors of gourmet popcorn and three delicious fruit smoothie blends were served, and every table was lined with the top fashion magazines of today. There was even a red carpet with photographers snapping shot after shot that later were printed out for those who braved the paparazzi. Everyone at the ceremony looked stunning and were lucky to witness Francisco Costa, Tom Ford, Tory Burch, Rodarte and Carolina Herrera take home awards for their wonderfully executed designs.